After a momentous journey of fighting fears, Tushar Kalia emerges as the winner of India’s Khatron Ke Khiladi 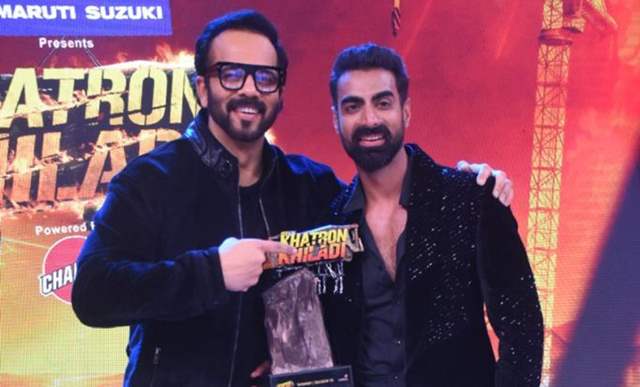 There is no greater achievement than conquering one’s fears! Hosted by action maestro Rohit Shetty, the 12th season of COLORS ‘Khatron Ke Khiladi’ presented by Maruti Suzuki, charged by Thums Up, trusted partner Kajaria Tiles, reached its final destination. Shattering records and taking varied platforms by storm, the stunt-based reality show became the #1 non-fiction show of the year 2022 and generated over 5 million social media conversations. With all its feats, the adrenaline rush of the latest season was at its peak at the finale. After 12 weeks of consistently fighting his fears and navigating his emotions to perform stunts, Tushar Kalia emerged as the winner of this edition. The competition was fierce with finalists of the season, Faisal Shaikh and Mohit Malik pitted against him. Laced with nail-biting stunts and dhamakedaar performances, the grand finale was a star-studded affair with the cast of Cirkus – Ranveer Singh, Pooja Hegde, Jacqueline Fernandez, Johnny Lever, Sanjay Mishra, and Varun Sharma joining the celebrations.

Nina Elavia Jaipuria, Head – Hindi Mass Entertainment and the Kids TV Network at Viacom18, said, “We’ve had massive viewership-based landmark moments with Khatron Ke Khiladi 12 reigning on television for its tenure. Nothing makes us happier than knowing that our efforts to raise the bar of entertainment have fructified. Big congratulations to Tushar Kalia, who conquered our hearts as much as his own fears. We thank the audience for their endless love and our advertisers for their support and trust in us.”

Manisha Sharma, Chief Content Officer, Hindi Mass Entertainment, Viacom18 said, “Congratulations to Tushar Kalia for winning hearts and the title of the ultimate Khiladi. Staying true to our theme ‘Bachke kaha jayega, khatra kahi se bhi aayega’, we delivered a season full of surprises and twists. The season was loaded with non-stop adventure and the contestants fearlessly fought the khatras and lived up to the spirit of the game. I would like to thank Rohit Shetty, and the entire team of Khatron Ke Khiladi who worked relentlessly to make this season a grand success.”

Never having declined or forfeited a challenge or a stunt, the ultimate Khiladi Tushar Kalia was one of the strongest contestants since the outset of the show. Tushar and Mohit Mallik earned the epithet ‘Desi Boys’ as they solidified their position early in the show as potential finalists for this season. While Tushar never refused stunts and tasks assigned to him, he made an exception for his friend and co-contestant Nishant Bhat, winning the hearts of many. The ace choreographer also brought a unique flavour of entertainment to the show by dancing away his fears in the most perilous situations. It’s no wonder then, that he was the first finalist after winning ‘Ticket to Finale’.

Rishi Negi, CEO, Endemol Shine India, said, “With each passing year, Khatron Ke Khiladi raises the bar by achieving new milestones and amping up every aspect of the show be it the action, the intensity, the entertainment or the thrills. This year too, the audience has loved watching the action king Rohit Shetty encourage and push our contestants to bring their A-game, as they faced their biggest fears head-on. Congratulations to Tushar Kalia on winning India’s most loved action reality show and a big thumbs up to all the contestants for joining him on this action-packed season.”

Commenting on the season and the contestant’s victory, Host Rohit Shetty said, “Every year we work extremely hard to bring unseen and out-of-the-box tasks that the contestants tackle, making the season even more exhilarating. The competition this season has been the toughest yet, with every contestant bringing their tenacity and determination to win. Tushar Kalia deserved the win. From the beginning of the show, he has brought on his fearless spirit and showed his true personality that is loved by many. I congratulate every contestant for challenging their fears this season and cheers to the whole team that put together yet another successful season.”

Commenting on the win, Tushar Kalia said, “Since my tryst with Khatron Ke Khiladi 12 began, I had my eyes set on victory. I’m thrilled at my win, since it is a culmination of all my efforts, determination and resilience to push myself to unbelievable limits, while competing the most determined daredevils the show has ever seen. I thank the makers of this show for piecing together an amazing season and the ultimate action guru Rohit Shetty for his support.”

Bracing the season finale in style, host Rohit Shetty along with the top 5 ‘khiladis’ visited the set of ‘Jhalak Dikhhla Jaa 10’ for a ‘dhamakedar’ Mahasangam episode. From fun-filled interactions with the judges (Madhuri Dixit, Karan Johar and Nora Fatehi) to making them perform some daredevil stunts onstage, the action master left no stone unturned to give the fans an unlimited dose of fun and entertainment. The grand finale night was replete with several memorable highlights with the entire cast of ‘Cirkus’. To kickstart the special night, Ranveer Singh pulled off a power-packed entrance followed by a super energetic dance performance on ‘Mera Wala Dance’, enthralling the audience. Boss lady Rubina Dilaik was seen taking the fashion quotient soaring and filling the room with laughter styling Ranveer Singh with some quirky props. Amping up the entertainment, veteran comedian Johnny Lever brought his unique brand of humour as he roasted the khiladis in his inimitable style. Staying true to the spirit of the finale, Pooja Hegde showcased her daredevilry by performing dragon fire tricks with the expert khiladi, Sriti Jha leaving the everyone astonished. This was followed by a stupendous entry on a cycle rickshaw on the iconic ‘Golmaal’ tune by the hilarious Varun Sharma, Sanjay Mishra, and Siddhartha Jadhav. That’s not all! These celebrity guests also got to taste the fear of stunts, as they performed some action-packed tasks.