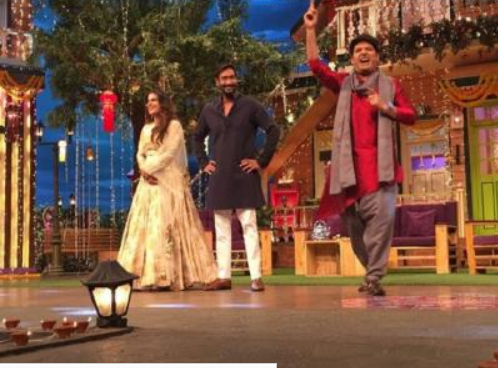 After ‘Ae Dil Hai Mushki’, now Ajay Devgn and wife Kajol will be soon on the ‘The Kapil Sharma Show’ to promote ‘Shivaay’.

Bollywood’s favourite couple would be seen having a blast on the hit comedy show.

The promo of the upcoming episode was shown yesterday (October 23) and the couple looked perfect together.

Kajol looked gorgeous in an off-white golden attire and the soft curls made her look superb. Similarly, Ajay looked dapper in a black kurta and leather loafers.

Ajay shared a small video snippet on his Twitter where he plays a prank with Chandan, who plays Kapil’s servant on the show. He tweeted “For those who’ve been saying- “we hear you’re a prankster, but never seen anything”- pulled one yesterday at The Kapil Sharma Show.” Shivaay is a story of a Himalayan mountaineer and also stars Erika Kaar, Sayeshaa saigal and Abigail Eames. The movie releases on October 28.