Anupamaa’: How will Anupamaa share two big announcements with the family? 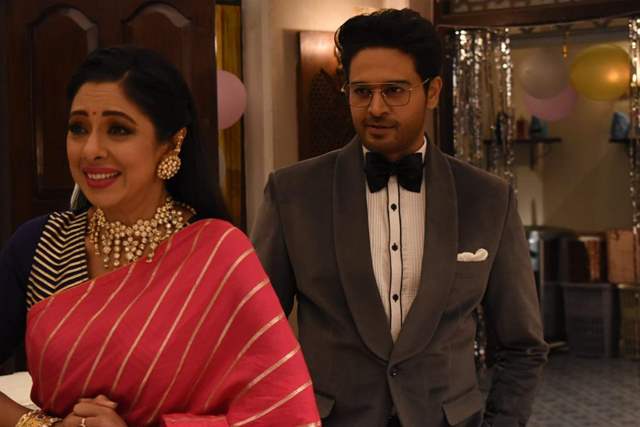 The Monday episode of Rajan and Deepa Shahi’s “Anupamaa” began with Kinjal telling Bapuji that they have decorated the house nicely. Dolly tells him that she has prepared all the snacks so that Anupamaa doesn’t have to do anything once she comes. Baa is upset seeing the preparations and asks them why they are giving so much hype to Anupamaa’s birthday. Dolly then tells them that Vanraj and Paritosh have gone to work, Sanjay tells them he feels they won’t attend the party, to which Samar tells them that they can have a party without them too. Bapuji tells them that it’s good that they are not there otherwise they would have spoiled the fun.

Meanwhile, Anuj and Anupamaa are on their way to the Shah abode. Anuj is happy to see Anupamaa so happy and tells her that thank god he is not driving as he wouldn’t have been able to see Anupamaa then. At the same time, Vanraj and Paritosh reach home and tell the family that their work got over early and they will work from home. He tells them just because the family is celebrating an outsider’s birthday that doesn’t mean the people who live in the house will have to go out.

After a while, Anuj and Anupamaa reach the Shah abode, and are surprised to see the main door closed. Vanraj opens the door and tells Anupamaa that on the auspicious occasion of Anupamaa jayanti he wanted to be the one to welcome them. He says that he has got an aarti too to welcome them. Anupamaa tells him that aarti is for great people like him. Vanraj mocks her and says that finally she has accepted that he is great to which she tells him that he is great at betraying people, and great at being shameless.

Anupamaa and Anuj then enter the house and Anupamaa is surprised to see the house decorated so well and so many gifts too. She was wondering which one to open first when Bapuji stops her from doing so. He tells her that they will first party and then she can open her gifts. Anupamaa then touches Bapuji’s feet and asks for his blessings. She then goes to Baa. But Baa in her old style keeps moving on her swing and Vanraj is happy seeing it. Anupamaa then stops Baa’s swing and hugs her. She tells her that she won’t leave her until she wishes and congratulates her.

Anupamaa is very happy and dances around and tells them this is for the first time she has felt that it’s her birthday. She then goes to Paritosh, pulls him by his ear and asks him to wish her. She then asks Kavya to wish her. To Vanraj she says that she doesn’t care if he wishes her or not because when it really mattered to her, he didn’t care, and now that he remembers it, she doesn’t care.

Anupamaa then tells them that she has big news to share with them. Samar interrupts her and takes her outside where they have written “Happy Birthday Anupamaa” and have lit candles for her. Anupamaa is super happy to see this and they all sing a shayari for her. Anupamaa is in tears hearing it. She thanks everyone and tells them it’s like Lord Krishna has given her the happiness of the past 45 years. Anupamaa was then about to share her news about Anuj, but they are interrupted by a loud thud and they see Kinjal has fallen unconscious.

Anupamaa and Paritosh take her to her room. Kinjal stops them from calling a doctor. Anupamaa tells Paritosh that she will take care of Kinjal and ask him to join the others. Meanwhile, Anuj tells GK that Anupamaa was about to say yes, but this happened. Once Paritosh and Baa leave the room, Kinjal tells Anupamaa that she has some news to share. She tells her that she wanted to share the news of her becoming a mother to her mother first.

In the upcoming episodes, we will see that Anupamaa dances to “Dholida” and tells the family that she is very happy and has a very big news to share with them. Everyone asks her what is it just then Anupamaa realises that Anuj too is waiting for the answer to his proposal. What will Anupamaa do now? Will she reveal to the family about Kinjal’s pregnancy and about her and Anuj’s relationship? To know what happens next, keep watching “Anupamaa”.