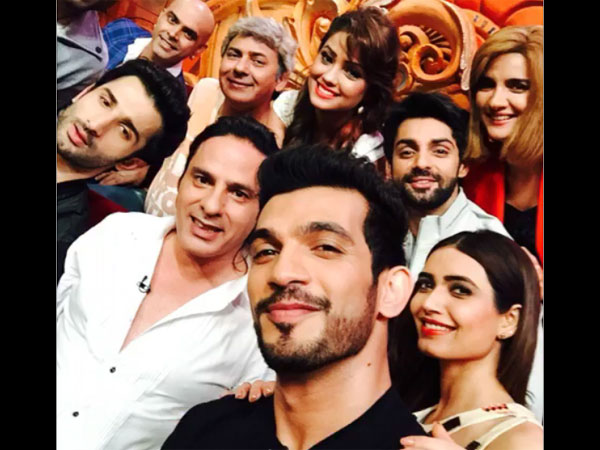 As Jhalak Dikhhla Jaa 9 is all set to witness a grand premiere on July 30, the contestants are leaving no stones unturned to put their best foot forward for their dance performances. As this season is just a few days away, the celebrity contestants are tirelessly practicing at the Jhalak House to impress the judges with their performance.

Apart from their rehearsals, these popular celebs are on a promotion spree as well! I’m sure, you guys must be wondering as to what are they promoting, right? It is pretty obvious that they are promoting, their upcoming reality show, Jhalak Dikhhla Jaa 9! JDJ9 contestants Arjun Bijlani, Karishma Tanna, Nora Fatehi, Sidhant Gupta and Salman Yusuf were busy promoting their show on the sets of Comedy Nights Bachao hosted by Krushna Abhishek.

The contestants had a great time while shooting for the show and were happily seen taking selfies with the team of Comedy Nights Bachao including Krushna Abhishek, Karan Wahi, Bharti Singh, Anita Hassanandani and Adaa Khan (pics in the slides). As per the reports, Arjun, Karishma and other contestants got roasted by Bharti and other members of their gang and Karishma’s tweet confirms us the same.

An excited Karishma tweeted: “Had a blast!! got roasted enough as usual.” After all, there should be some fun after hectic rehearsals, right? Jhalak Dikhhla has been in the news ever since it’s launch. The first episode has already been shot and we had earlier reported about the same There is a major change in the voting format this time, which will shock all the viewers out there.

If reports are to be believed, there will be no audience voting this time! The peeformances will be purely judged based on the score given by the judges and the live audience present there.