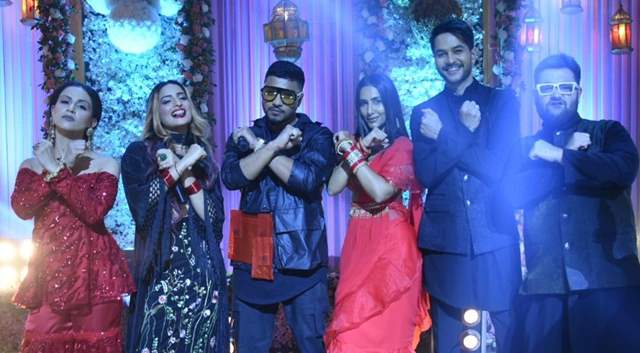 In the current track of Sony Entertainment Television’s popular fiction show Bade Achhe Lagte Hain – 2, viewers are eagerly waiting for the festivities to begin as not long after Ram (Nakuul Mehta) and Priya (Disha Parmar), Akshay (Pranav Misshra) and Shivina (Sneha Namanandi) have also tied the knot after lot of twists and turns.

To mark the onset of the celebrations, popular rapper and singer, Raftaar will be seen making an appearance in the show for a Karwachauth special episode.

Adding to the romance, Raftaar along with singer Rashmeet Kaur will be seen giving a heartfelt performance on their upcoming new song, ‘Ghana Kasoota’ as the lovely couple – Akshay and Shivina dance along.

Talking about the same, Sneha shares, “I couldn’t be more excited about Raftaar being on our show! I am an ardent fan and his songs are my favourite jam in any party. So, just imagine my excitement when I got to know that he will be performing on his new single that too especially for Pranav and me for a special sequence! I am sure his new song will be a raging hit and I wish both – Raftaar and Rashmeet lots of love and luck.”

Furthermore, even Pranav expressed his excitement saying, “I think having Raftaar and Rashmeet on sets has been one of the best experiences on the show so far. They really brought along a sense of joy and got everyone in the festive mood! They graced our show, sang their beautiful song and celebrated love! It’s nothing short of a treat for all the viewers and I hope they enjoy watching this episode as much as we enjoyed shooting for it.”

Featured Video
Talking about his song, ‘Ghana Kasoota’ and how it is related to the upcoming track of the show, Raftaar said, “It is delight to be a part of a show like, ‘Bade Achhe Lagte Hain 2! My song, Ghana Kasoota fits beautifully with the narrative of the show. This is the first time I have integrated my non-film music in a television series and I am mighty excited. Just like the song which is all about living life to its fullest, being grateful for being alive and regaling in the feeling of being awesome, my on air appearance leverages those ideologies during that particular scene.

He further adds, “I’m extremely happy to align forces along with my Kalmkaar associate Rashmeet Kaur on a show that is quite contemporary and has won the hearts of many. I’m happy that my song resonates with the viewers of the show and has been received well. This association is quite unique and I’m looking forward to many more such similar associations in the future. Watch out for my new song that is dropping on Sony Music on 11.11.2021 at 11am! It’s Raftaar 2.0 this time around! A mix of desi tadka with a dash of global hip hop.”