Bhagyashree discover ‘Lady Govinda’ on the sets of DID Super Moms 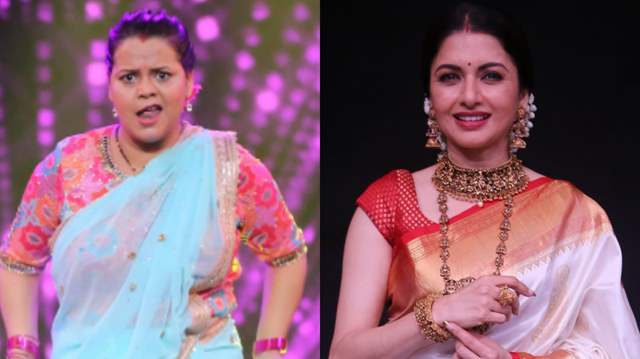 After receiving an overwhelming response to the previous two seasons that introduced audiences to some truly exceptional moms whose dancing skills can give even the younger dancers a run for their money, Zee TV recently launched the 3rd edition of its popular non-fiction show – DID Super Moms. Airing Saturdays and Sundays, the new season has an exciting panel of judges – Remo D’Souza, Bhagyashree Dassani and Urmila Matondkar to mentor and guide the talented moms through their journey and help them achieve their dancing dreams.

The upcoming Grand Premiere episode of DID Super Moms will be packed with some amazing acts, and we are sure viewers will have a gala time watching these super talented moms dance their hearts out to impress the judges. While all the contestants put their best foot forward during the shoot, it was Lucknow’s Riddhi Tiwari who caught everyone’s attention with her enthralling performance to the song ‘Bade Miyan Toh Bade Miyan.’ Though everyone applauded Riddhi for her mesmerizing act, Bhagyashree and Remo couldn’t help but compare her to Govinda. The judges were so impressed that they even addressed Riddhi as ‘Lady Govinda.’

As Bhagyashree mentioned, “You truly are Lady Govinda. The avatar you have shown through this performance was absolutely brilliant.”

Remo also added “I agree with Bhagyashree, you have a very unique style of dancing and entertaining everyone. Having said that, I also feel that you have Govinda Ji in your blood and inner soul. I have seen several boys trying to act like him, however, this is the first time I have ever seen a woman emulating Govinda in front of me and pulling it off so well. Over the years, I have also noticed how Govinda ji is the only one who can give certain kinds of expressions, but today you totally aced his expressions! Your performance was outstanding, and the act was truly hundred out of hundred.”

While Remo and Bhagyashree couldn’t stop praising Riddhi’s performance, wait till you watch all the stunning performances by the other fantastic contestants of DID Super Moms this weekend!