I gave up the hope of getting the film post Bhansali Sir’s reaction: Varun Kapoor on ‘Gangubai Kathiawadi’ 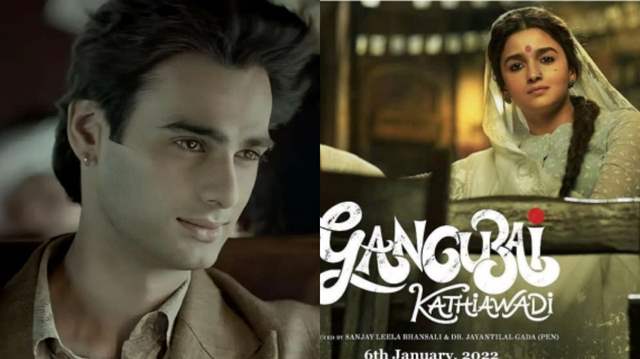 Varun Kapoor- a known name from the Television industry made the fraternity super proud with his small yet impactful role in Sanjay Leela Bhansali’s movie ‘Gangubai Kathiawadi’. Kapoor took a conscious decision of staying away from TV and shift his focus to sufficing the artist in him by trying his hands in different projects and mediums. Varun’s quest of performing impactful roles as an artist has started to fulfil as the actor played an important role in the movie of the most inspirational directors and producers of Bollywood- Sanjay Leela Bhansali. Varun plays the character of Ganga’s (Alia Bhatt) boyfriend who sells her off in a brothel in return of 1000 bucks.

India Forums got in touch with the actor to congratulate him and ask him about his experience of shooting with the most celebrated director in his movie debut. Read on the interview:

It was a pleasant surprise to watch you on the big screens. Tell us about it.

Well, it has been a while that I was away from TV shows and I would admit that it was a conscious decision as I wanted to make a shift to movies and give myself the time to brush up my skills and suffice the actor in me. It has been a tremendous journey and I couldn’t have asked for a better debut other than featuring in a Sanjay Leela Bhansali film. The cherry on the cake was SLB directing the movie himself. I can’t tell you how big a deal it is for an actor.

How did you beg the part?

It’s a long story. Since I decided to make a shift in my career, I started making rounds of casting directors office, trying my luck to hit the bull’s eye. One fine day, I went for my meeting with a casting director and came to know that Shruti Mahajan’s office is nearby. Shruti is a renowned casting director. I happened to reach the office, only to find the doors locked but I was certain to meet her and that’s why I paid a visit to the office another day. I found a young girl speaking to a bunch of actors. I wanted her to finish the conversation with them before I approach her. I came to know she is Simmi, Mahajan’s assistant. Simmi took me to her office and asked me about my previous projects. She informed me that there’s a role in Sanjay Leela Bhansali’s movie which he will also direct. She asked me if I was only looking for lead roles and I said no since I was in for any role in a movie directed by Bhansali Sir himself. She asked me to give an audition and I adhered.

As an actor, I forget after giving an audition. A few days had gone by and I was in talks for a TV show. We were on an advanced stage and some final decisions were to be made. I saw three missed calls on my phone while I was in the meeting. I called back and Simmi told me that Sir wanted to meet me and wanted to check if I gave the audition all by myself or was, I helped by his team. I can’t tell you how happy I was. The break that I took on the peak of my TV career started to make sense and I felt like the hardwork that I’ve done on my craft is paid off. I was quite pumped up to meet Mr. Bhansali. For obvious reasons, I was anxious and nervous.

How did the meeting with SLB go?

So, I remember we were supposed to meet at 7pm but I reached the office half an hour early as to calm myself and get going. I was very nervous when I entered his office. We’ve always envisioned him for the larger-than-life movies that he has give and the legend that he is. I’ve always been a big fan of his projects and with all these feelings, I went inside. Sir played my audition, I couldn’t even meet his eyes. The entire feeling of sitting across the most celebrated directors of all time was unsettling. He asked me about my career graph and I told him about my TV shows and also told him that it was my conscious decision to take a break to focus or brushing my skills and shifting focus. After this, there was a five second silence in the room where Shruti Mahajan sat beside Bhansali Sir. Those five seconds seemed extremely long. I saw Sir and Shruti exchanging a look post which Shruti told me that they’ll let me know. I came out of the office and was extremely upset. I was angry on myself and thought I could have done a little better to impress sir and bag the project. Post which, like every human being, I calmed myself and thought that I’ve come this far and would bag the role the next time. With a heavy heart, I left the office and, on my way, back home, Simmi called me to inform me that I’ve bagged the part. I can’t explain the find feeling I was going through. I was ecstatic to say the least.

The movie got pushed a few times. What was going in your mind in that phase?

While I took up the project, it was not an easy ride. There were many obstacles. I had a personal life issue at that phase because of which I wasn’t available to shoot. Post that, we had two lockdowns. Bhansali sir along with Alia contracted COVID. A lot of other crew members got the virus because of which the shoot was delayed. But now when the movie has finally hit the screens, all of those struggles kind of doesn’t make any sense as the happiness of the response on film has taken over.

Tell us about your first day on the sets of ‘Gangubai Kathiawadi’.

Oh! Where do I begin from. We’re all fans of SLB’s movie sets on-screen, imagine being on one. I mean it’s totally different. The sets were huge and were made keeping in mind the intricate details. I was spell-bound. The entire feel and vibe of the set was atleast a 100 times more than what you experience being on other sets. I was very nervous on the first day as it was a totally different medium, people with different mindset, different crew and to the feeling of being directed by the man himself- Sanjay Leela Bhansali is quite overwhelming to say the least. Seeing the mike in his hand and the preps on the sets, I was left quite anxious on the first day.

How was it working with Alia Bhatt? Were you star-stuck?

Yes, I mean who will not? She has proved herself time and again. Starting her career with Student of the Year and going ahead to take a totally different character in highway speaks volumes about her guts and the expertise that she has as an actress. She was very warm when I first met her. We were introduced by someone and she had a radiant smile on that little face of hers when she greeted me without any starry attitude. We sat and did our readings. I remember after the reading she went on to tell me: ‘it was great meeting you’. The humility and warmth speak volumes about the kind of person she is- a superstar for a reason.

I remember the first scene that I had, I fumbled because of the nervousness and Sir told me that the dialogue that I delivered made no sense. I apologized and saw Alia smiling at me. I apologized to her as well but she said that she can understand. I feel, without me telling her about the anxiety I was going through, she understood it and I love that about her.

I think I’m yet to sink in the feeling of being a part of SLB’s movie and it’s surely going to take a while. I would like to mention that Television has given me a lot. Nobody comes to Mumbai after learning the craft, atleast I didn’t. TV thought me so much and I’ll forever br grateful for the kind of exposure that I’ve got from the medium. It allowed me to work and then take a break to go back to my roots. I’m thankful to all the producers, directors, co-actors and the crew that I’ve worked with. I am where I am because of them, and of course my family and fans. Hopefully, this is just a beginning. Many more to follow. Fingers crossed.