Jhansi Ki Rani fame Anushka Sen thanks Anushkians for being in her life! 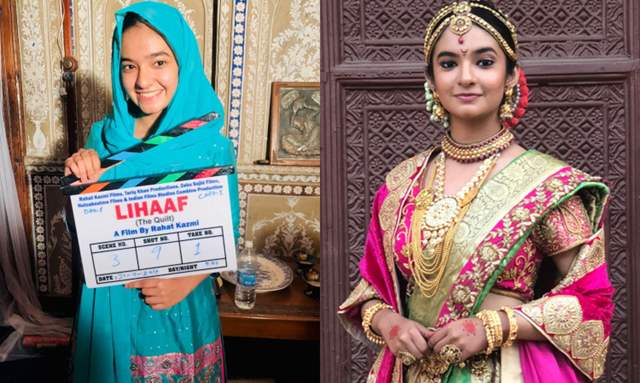 It’s not new that television actors are trying their fate in the Bollywood industry and are doing well too. After Kritika Kamra, Mouni Roy, Hina Khan and Radhika Madan; talented television actress Anushka Sen has stepped in the world of cinema with Indian International filmmaker Rahat Kazmi’s upcoming film Lihaaf. She will be seen as young Ismat Chughtai. Anushka who is currently seen playing the character of young Rani Laxmibai in Colors’ Khoob Ladi Mardani- Jhansi wali Rani is showered by immense appreciation from the audience. Her costume, jewellery and above all her powerful performance has garnered love and admiration from the viewers.

Anushka started working in a young age and has many shows to her credit. She also played the role of young Parvati in Life Ok’s Devon Ke Dev Mahadev and rose to fame with Sab TV’s Baalveer, which made her a household name.

Recently, we got in touch with Anushka to know more about her character in Lihaaf and several aspects revolving around the film and her career. Here are the Excerpts from the conversation that we had with her.

Firstly congratulations on your film, please tell us something about your character?

Thank you so much. I am portraying the role of Young Ismat Chughtai, a legendary writer born in the era of pre-independence. She was a brilliant and brave writer in that era. Again a women-centric role which I love to play as an actor.

How did you prepare for this role?

Firstly, I had to prepare myself to be like in the era of pre-independence. The body language, the diction of reading the holy Quran. I also got to know a lot about the rich culture.

Lihaaf will be premiered at such a big platform, how does it feel? And what would you like to say?

Yes, I am blessed that it’s going to premiere in Stuttgart, Germany Film festival followed by other Countries. Looking forward to visit.

Your show Jhansi Ki Rani is doing really well. Are you planning to take up movies after this show or will continue with serials? Any movies in pipeline?

Thank you so much to all viewers who are giving immense love to our show JKR. Since I am busy in JKR, so not taking up any project which is coming up. But Yes I will definitely love to do quality movies. As an actor, we are always ready for quality work whether it’s Movie, TV Show or Web series.

At such a young stage you have achieved so much. What next big thing do you have in your mind?

I am in a learning process and blessed being whatever achieved till date. But it’s a long journey and we have to keep on learning each day. I am blessed to have worked with some brilliant Directors and co-actors which has really helped me a lot in my career.

Lastly, a message for your fans?

I am blessed with true and loyal fans who are constantly supporting and wishing for me. Making great edits to keep me happy always. Thank you Anushkians for being in my life.

Lihaaf will be premiered on the 16th Indian Film Festival Stuttgart in Germany from July 17 to 21, 2019. Wishing Anushka and the entire team immense luck and success for this project.