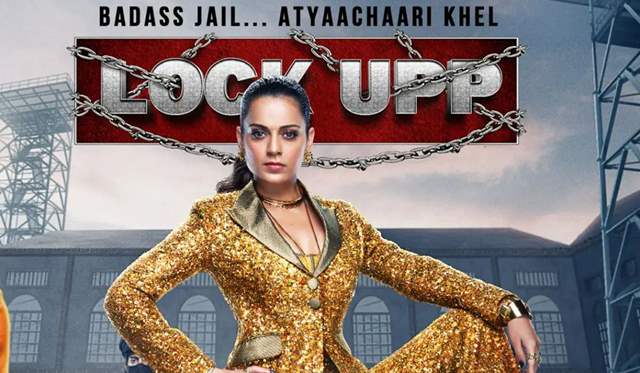 It wouldn’t be a day and actor Kangana Ranaut is not in news or controversies, isn’t it? This time around, it is about the show she is hosting, Lock Upp, that is all set to stream on MX Player and Alt Balaji tomorrow onwards.

Kangana who is making her OTT debut with one of the most controversial reality show in India has been charged with a FIR. The actress who is promoting her show without any controversy or any negativity around has been slammed by a FIR, which is not true. All of things Kangana is accuse of are false and are deliberate attempts to do bad publicity of the unique show.Kangana has been busy promoting her show. Now, once again she has been dragged to defend, there has been a fresh FIR against her. Kangana is once again embroiled in a case.

The show finds itself in legal trouble as a case against the show has been filed by one Sanober Baig. As per information, Baig has made claims of plagiarism against Ekta Kapoor for the show. Baig reportedly said that the show which will be hosted by Kangana Ranaut was plagiarized from his game show concept ‘jail’. Thus, he made claims of plagiarism against Ekta Kapoor’sAlt Balaji, MX Player and Endemol Shine, among others.

Baig further claimed that a court order has been issued in this regard, however, details of which are still awaited. Baig had got his concept registered in March 2018. A press conference was also held in Mumbai on Friday which was organised by Baig and his legal counsel.

Ever since the show’s announcement was made, it has been making headlines. The show’s trailer was released recently on February 16. As per the trailer, Kangana Ranaut, who plays the host, has made her own set of rules for the participants to abide by.A total of 16 controversial celebrities have been selected to be a part of Lock-Upp. These controversial celebrities include the likes of comedian Munawar Faruqui, Poonam Pandey, wrestler Babita Phogat and Nisha Rawal among others. Sushmita Sen’s ex-boyfriend Rohman Shawl, television actor Karan Mehra, author Chetan Bhagat and Rakhi Sawant’s ex-husband Ritesh Singh’s names are also being reportedly taken as contestants of the show. However, the official names of all 16 controversial celebrities are yet to be announced.