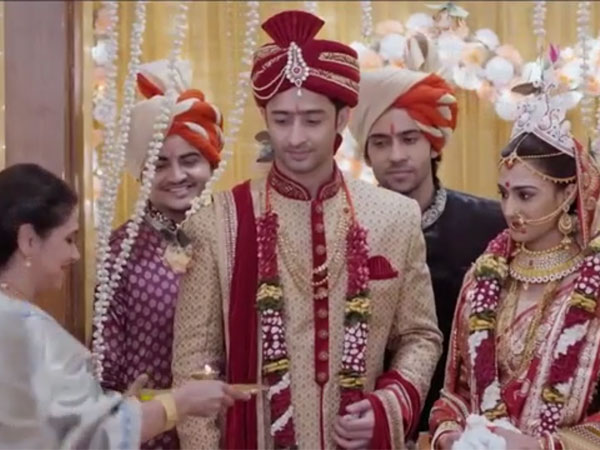 In Kuch Rang Pyar Ke Aise Bhi, Dev (Shaheer Sheikh) and Sonakshi’s (Erica fernandes) grand wedding took place on 30th September, 2016 in a traditional Bengali ceremony. The much-awaited wedding took place without much hassle, although there were a few cultural clashes. Nonetheless, fans were equally happy to witness their favourite couple’s grand union in an hour-long episode. The hightlight of the episode, was of course the Bengali wedding theme. Our blushing bride, Sonakshi glowed in a traditional red Banarasi saree and traditional jewellery

Ishwari Shocked In the last episode, everyone waits for Sonkashi to arrive at the mantap. Ishwari is shocked as they expected her to wear the expensive lehenga gifted by them. Sona instead choses to wear a saree as per the Bengali customs.

Bua Ji Furious Even Bua ji is furious and blames Sonakshi for not respecting her mother-in-law’s choice. Ishwari convinces her and they proceed towards the mantap.

The Grand Wedding Sonakshi arrives at the mantap and Dev is mesmerised on seeing her. The marriage rituals begin.Radha Rani’s Drama Meanwhile, Bua ji gets to know that non-veg dishes are included in the menu. She accuses Sona’s family for doing so. Radha Rani creates a drama. The Dixits decide not to have dinner, which upsets Asha.

Dev and Sonakshi The wedding rituals are over and the couple take blessings from the elders. They proceed towards Dev’s house, where they are welcomed warmly. But, they are in for a shock, when it is revealed that a fish has been sent along with the shagun items. But, Sourav and Elena handle the situation.

Ishwari In the upcoming episodes, Ishwari would be preparing dinner for Bua ji as they would have skipped the dinner. She will be tired and her blood pressure shoots up and she would faint in the kitchen. Dev and Sonkashi would be called to take care of her.

Ishwari’s Motives As per the latest spoiler, it will be revealed that this was planned by Ishwari! Although, she was instrumental in arranging the wedding, it looks like her insecurites and possessiveness have not died down yet. She chose to act good only to win her son’s trust back.

Sonakshi Learns The Truth Soon, Sonakshi would learn the truth about Ishwari. It is also said that, she will reveal the same to Dev. But, will he believe her? No. This will lead to a major argument between the newly-weds. How will Sona handle the situation? Keep guessing! Erica shared her experience of shooting a wedding sequence for the very first time in her life, to a leading entertainment portal.

She told, “My bridal look in the show is a big switch from what viewers have seen me as Sonakshi till now. When I tried the sari for the first time, a lot of people said that I actually look like a Bengali.” She also added that her co-stars made her understand about all the traditional rituals and customs. Even Shaheer shared his views regarding the wedding sequence. He told, “In India, weddings are not just a confluence of two individuals but also their families, social circles, and cultures.

It is interesting that two drastically different families are coming together and experiencing the traditions of each others cultures.” Furthermore, he added “Shooting the wedding sequence has been a blast and we all are having a great time. We are sure the audience too will enjoy watching the sequence.”