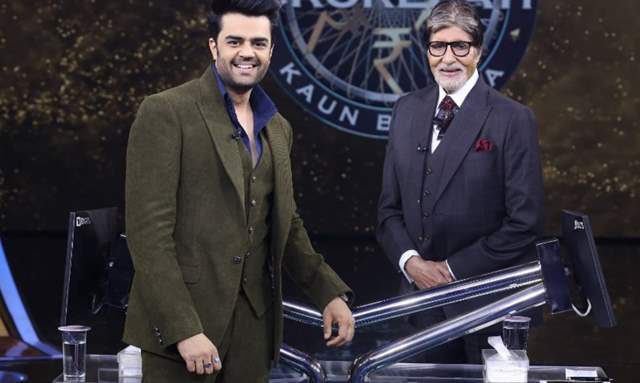 Starting his career as an RJ and VJ, Maniesh Paul has only stepped up the ladder of success and has gone on to become the audience’s favorite anchor, comedian, and host. Making his way in this industry, he surely has created a fandom for himself. On Tuesday, he will be seen in Sony Entertainment Television’s Kaun Banega Crorepati 13 along with the leading ladies of the channel’s show like Disha Parmar (Priya) from Bade Achhe Lagte Hain 2, Chandni Sharma (Akanksha) from Kaamnaa and Additi Gupta (Dr. Deepika) from Dhadkan Zindaggi Kii. Currently, Maniesh Paul is seen hosting ‘India’s Best Dancer Season 2’ and has been receiving a lot of love for his stint on the show.

Maniesh Paul who has earlier co-hosted Kaun Banega Crorepati with Amitabh Bachchan in 2014 was extremely glad to return to the sets, this time, however, he took the hot seat and participated in the quiz to answer the questions. Prior to taking charge of the hotseat, he will also be seen hosting the Fastest Finger First – Triple Test for the leading ladies of Sony TV.

Talking about his experience, Maniesh Paul says, “It feels like a homecoming to return on the sets of Kaun Banega Crorepati on camera. It is a known fact that I’m a huge admirer of Amitabh Bachchan sir and can never deny an opportunity to meet him. Being on KBC takes me back to the one most fortunate event of my life, where I could share the screen with him to co-host the show, till date, I regard that as my biggest professional achievement. I am extremely delighted to take the hot seat for the first time in my life and be quizzed by Amitabh Bachchan sir himself.”

In the show, he along with the actress’ will be seen putting forth a perfect camaraderie where they will be seen sharing various unknown facts, personal anecdotes, and more. Moreover, along with Amitabh Bachchan they will be seen taking part in a roti-making competition. Furthermore, the guests on the show – Maniesh Paul, Disha Parmar, Chandni Sharma, and Additi Gupta will be seen donating the proceeds from the winning amount to ‘Khushiya Foundation’ that works towards the betterment of women and children.