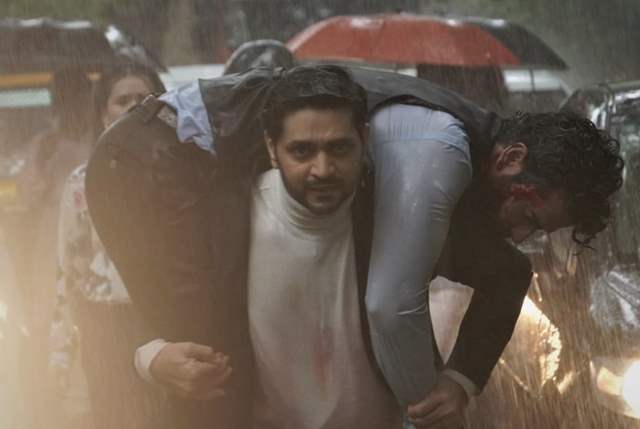 Zee TV’s top-rated show, Kundali Bhagya, has kept the audience at the edge of their seats over the past few months with several interesting twists and turns in Preeta’s (Shraddha Arya) life. Post the recent five-year leap in the show, the tale has turned on its head with Arjun (Shakti Arora) troubling Preeta by claiming to be a fan of Karan Luthra and recreating special memories of #PreeRan in front of her. While it will be interesting to watch what happens when his real identity is revealed in front of Luthras, you cannot miss the upcoming high-octane sequence that Arjun aced!

After making a dramatic entry into Kundali Bhagya by jumping over trucks, Arjun will now be seen pulling off yet another high-octane action sequence in the upcoming episodes. But this time around he will not be jumping from one place to another! In fact, he will be seen lifting up Rishabh (Manit Joura) after the latter gets badly injured in an accident. Though everyone will applaud him on the show, little does anyone know that the dreadful attack was planned by Arjun himself. After seeing Rishabh in pain, he will have a change of heart and will be seen taking him to the hospital in a bid to save him. What’s more is that Shakti braved heavy rainfall and slippery conditions to shoot the whole sequence. Despite the downpour on the street, the team shot for this sequence and though it gets difficult for someone to pick up a person during such a rainy day, Shakti picked up Manit in a jiffy and ensured that he gave the shot with absolute perfection.

To carry Manit was not an easy task, but Shakti aced it and it was all down to his fitness level, which the actor has been working on over the past few years. In fact, even Manit found it difficult to balance his body on Shakti’s shoulders so that the latter can walk comfortably.

As Manit Joura mentions, “The upcoming episodes of Kundali Bhagya will surely enthral the viewers and keep them hooked to their television screens. The audience has seen Arjun in revenge mode over the past few weeks and while he wants to harm Rishabh and Preeta, his love for his brother is way more than his vengeance against him. And that’s why, as soon as he will see Rishabh suffering after the accident, he will run towards the latter, put him over his shoulders and take him to the hospital.”

He further adds, “Since the day Shakti joined our team, he has always been up for shooting extraordinary sequences and taking up crazy challenges. When we were being briefed about the scene, I was very worried as he had to carry me on his shoulders. It was raining like cats and dogs, but he didn’t even hesitate once. He picked me up and put me on his shoulders flawlessly, carrying all my body weight on his shoulders without even saying a word or letting it show on his face. It truly showcases the level of fitness that he has managed to achieve. In fact, it was difficult for me to balance on Shakti’s shoulders. I wanted to try and make the walk back as comfortable as possible for him. If I was finding it difficult, imagine the kind of difficulty he would be facing! I must mention that I had a great time shooting for this sequence and I am sure viewers will also love seeing it on their TV screens.”

While the dramatic sequence featuring Arjun and Rishabh will leave you stunned, will Arjun’s concern for Rishabh reveal his truth in front of Preeta? Or does he have an alternate plan to this? It will truly be intriguing to watch how the story unfolds from here on!