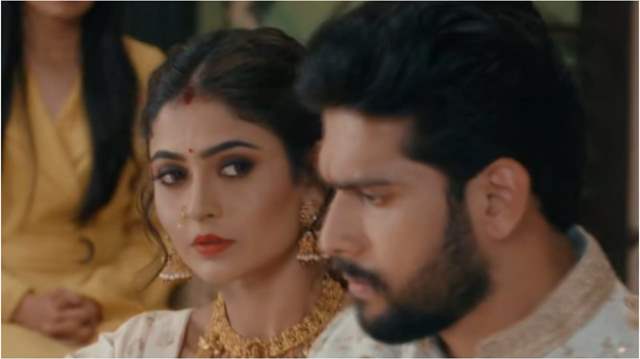 Star Plus show ‘Mehndi Hai Rachne Waali’ is getting quite interesting with each passing episode. The current track of the show revolves around Sunny and Esha trying to create a rift between Raghav and Pallavi. All this while Pallavi is unable to understand about the issues that she’s facing in her personal life is all because of Esha.

In the upcoming episode, Pallavi works on the jewellery designs and suddenly hear Keerti and Sunny fight. She goes there to know the matter and calm down both Sunny and Keerti. While Pallavi goes out of the room, Esha replaces the designs with a blank paper. Pallavi asks Keerti and Sunny to calm down. Sunny states that he planned a surprise for Keerti but she ruined it by reacting aggressively. Keerti feels guilty. Pallavi feels that Sunny does a lot of drama.

Pallavi gets back to her room to find that her designs are missing. Raghav asks Pallavi for the designs but she is unable to deliver the same. Esha comes to the rescue and gives the same designs to Raghav saying that it’s her design which she never used. Pallavi finds something fishy.

Pallavi apologizes to Raghav for the same and states that she will prepare sweets for the old-age home people. Raghav asks her to make the sweets sugar-free. Sunny hears it.

Featured Video
Pallavi discusses the design issue with Keerti and states that something is fishy. Pallavi realizes that Esha was missing when everybody gathered while Keerti and Sunny had a fight.

Sunny makes Pallavi pack sweet dishes in another room so that he could lock her.

In the upcoming episodes, Pallavi will end up with the sweets for the old-age people leaving Sunny and Esha shocked.