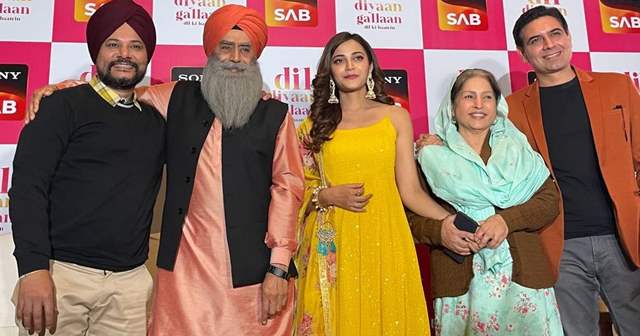 Instilled with the distinct flavour of Punjab, Sony SAB’s latest addition to its robust line-up of shows ‘Dil Diyaan Gallaan’ is an emotional migration story told through a positive and hopeful lens. The show features veteran actor Pankaj Berry and an ensemble cast including Kaveri Priyam, Paras Arora, Jasjeet Babbar, Sandeep Baswana, Ravi Gossain, Hema Sood amongst others. The show focuses on the story of a Punjabi family struggling with the consequences of migration and unresolved emotions among its members. The cast of show visited Delhi to meet and greet their fans a happy Lohri. During their visit to Delhi, cast members Pankaj Berry, Sandeep Baswana, Kaveri Priyam, Ravi Gossain and Jasjeet Babbar shared insights into the show, their experience of shooting so far, and gave a sneak peek into the upcoming storylines and twists. They discussed the significance of Lohri, the harvest festival that always brings families together not just in Punjab, but across the country.

The upcoming storyline of the show will keep the viewers intrigued with Amrita staying back in India and joining hands with Veer (Paras Arora) to solve the misunderstanding between the first two generations and bring the family together.

Pankaj Berry, who plays Dilpreet in the show, says, “As a Punjabi, Lohri is close to my heart, and I have so many childhood memories attached to it. I feel playing a character like Dilpreet on-screen has been a blessing for me as it made me nostalgic while shooting. Dil Diyaan Gallaan explores the impact of unresolved grudges and conflicts on a family. It’s a journey of a family that’s forced to confront their past and attempt to heal old wounds when the third generation intervenes. It’s been an amazing experience so far and I am looking forward to the subsequent storyline which is filled with heartwarming sequences and is sure to take viewers on an emotional ride.”

Sandeep Baswana, who plays Mandeep in the show, added, “The show has been an incredible experience for me so far and I was super excited about the Delhi visit. It was a great opportunity to interact with the media and our fans in the city. Dil Diyaan Gallaan has been receiving a lot of love and appreciation from the viewers and it feels great to be associated with a show that is bringing families together. The best part is that the audiences are resonating with the characters and their emotional journey. I’ll just say that there is a lot in store for you so stay tuned to Sony SAB and Dil Diyaan Gallaan.”

Kaveri Priyam, who plays Amrita in the show, said, “Since the very beginning, Dil Diyaan Gallaan has been a show that gives people a different perspective. And surely the response that we have received so far has been overwhelming. It’ always feels great to be in Delhi, the food has always had my heart here and coming here around the festival Lohri has doubled my excitement. I firmly believe that the show has struck the right chord with the audiences who are now a part of our emotional journey. So, don’t forget to watch Dil Diyaan Gallaan on Sony SAB as something very new and exciting is going to happen in the coming episodes. Stay tuned.”