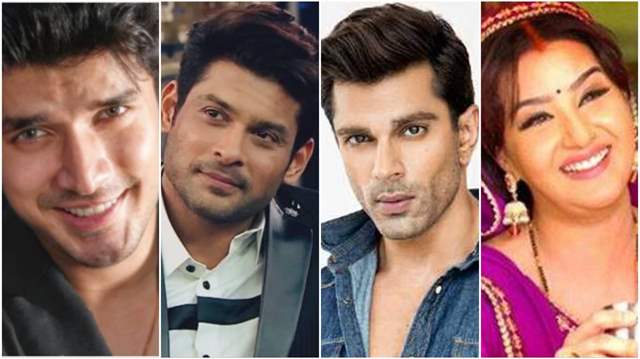 Paras Kalnawat’s service as an actor for Star Plus show ‘Anupamaa’ has ended. The actor and producers didn’t seem to be on the same page and hence the makers took the harsh decision. Apprently, makers were against Paras taking up another show on the rival channel while Paras mentioned being unhappy with his character graph in the show.

Well, this is not the first time that an actor has been replaced overnight. Television industry is quite uncertain. While at times the producers get finicky, few times the actors are at fault, in both the situations, the actor usually gets replaced. Post replacement, a few shows continue to get the love while others have to shut shops. Have a look at a few controversial tiffs between actors and producers.

Featured Video
Shilpa Shinde
A lot have been said about ‘Bhabiji Ghar Par Hai’ actress Shilpa Shinde when she refused to shoot for the show and demanded a hike in her per-day fees. The show was at it’s peak and the makers found themselves in a fix. They managed to pull off a few episodes with a dupe covering her face with her saree’s veil. The story was manipulated to adjust the missing Angoori bhabi until the producers finally found Shubhangi Atre to replace Shinde. Shinde and the producers Sanjay and Benifer Kohli often spoke about the matter.

Sidharth Shukla
Late actor Sidharth Shukla had creative differences with the makers of ‘Dil Se Dil Tak’. The makers and Shukla mutually decided to go separate ways as Shukla wasn’t happy with her characters’ graph. There were reports of Shukla halting the shoot which affected the telecast of the show. Shukla had further confirmed the same stating that he wasn’t keeping well and that’s the reason he couldn’t shoot for the show. He was later replaced by Rohan Gandotra.

Rohan Mehra
Rohan was quite loved for his stint in Star Plus show ‘Yeh Rishta Kya Kehlata Hai’ as Naksh. The actor was keen on taking up Bigg Boss 10, however, because of the contract, he couldn’t sign the show and hence he decided to choose Bigg Boss over ‘Yeh Rishta…’ Rishi Dev further replaced him in the show.

Giaa Manek
Giaa Manek was the face of Star Plus as well as popular daily soap ‘Saath Nibhana Saathiya’. She demanded for a pay hike but was also keen on being a part of Colors’ show ‘Jhalak Dikhhla Jaa’. Giaa further took a very bold step of going ahead with JDJ. Saathiya makers then roped in Devoleena Bhattacharjee to play the iconic Gopi Bahu.

Karan Singh Grover
Interestingly, KSG hasn’t left one particular show. He has quit a couple of shows that he took up but left mid-way for various reasons. Talking about Dil Mill Gayye, KSG left the show and the makers had to put his track on hold. Producers roped in Karan Wahi’s character as Dr. Siddharth to romance Riddhima (Jennifer Winget). By the time people started to like SidMa, KSG returned to the show with a bang. Furthermore, Grover quit Zee TV show ‘Qubool Hai’ as he signed a movie. After a long break from TV, KSG was seen in Star Plus show ‘Kasauti Zindagii Kay 2’ as Mr. Bajaj. However, he left the show mid-way. The character was later played by Karan Patel.

Hina Khan
Hina amicably parted ways from ‘Yeh Rishta Kya Kehlata Hai’ after being a part of the show for many years. She went through a proper image makeover and took up Colors’ show ‘Khatron Ke Khiladi’ and later joined ‘Bigg Boss 11’ for the same show. Post Hina left the show, the makers showed Akshara dead. Khan later played the antagonist in Star Plus show ‘Kasauti Zindagi Kay 2’ but later left the show mutually. Aamna Sharif was later roped in for the character.

Pulkit Samrat
Apparently, Pulkit Samrat who was a part of Star Plus show ‘Kyunki Saas Bhi Kabhi Bahu Thi’ decided to take up NDTV Imagine’s show ‘Say Shava Shava’ and had signed the show without informing the makers. As per reports, the producers of the show were extremely upset with Pulkit’s decision.