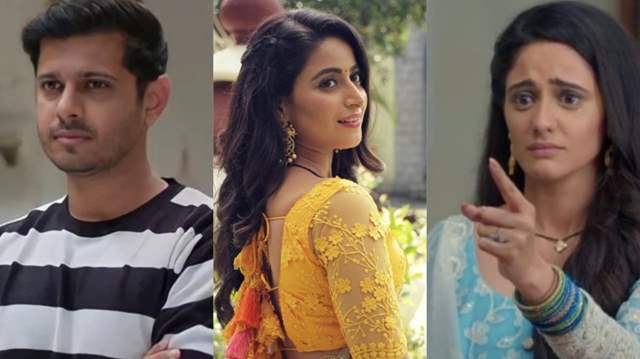 Star Plus show ‘Ghum Hai Kisikey Pyaar Meiin’ is gearing up for an interesting track. The show has left fans curious about the upcoming track. The current track of the show revolves around Samrat leaving the decision of divorce on Pakhi as he has realized that Virat feels for Sai. In the previous episode, Pakhi asked Virat to meet him alone.

In the upcoming episode, Pakhi and Virat meet in a café wherein Pakhi tells Virat that they should reconcile and start afresh, Virat makes it clear to her that he loves Sai. Pakhi agrees to it and states that Sai doesn’t feel for him at all. She mentions that Sai doesn’t value his feelings. Pakhi forces Virat to re-unite with her but Virat stays adamant. Furthermore, Sai happens to enter the same café and sees Virat and Pakhi meeting alone while Pakhi holds Virat’s hand. Sai gets shattered.

India Forums bring to you a little update from the upcoming track. Sai gets disheartened and upset as she had start to think about a normal relationship with Virat on Samrat’s insistence. However, watching Virat and Pakhi together, holding hands create a lot of confusion and sadness for Sai. Sai talks to Shivani and reveals about Virat and Pakhi’s meeting in the café.

Featured Video
While Sai talks to Shivani, Virat overhears it and decides to inform the entire family about his meeting with Pakhi in café. Virat will tell the family that Pakhi wanted an advice and thus they met in a café.

Will Sai and Samrat understand Virat’s intentions? Or will they continue to misjudge him? Post your thoughts in the comment section below.