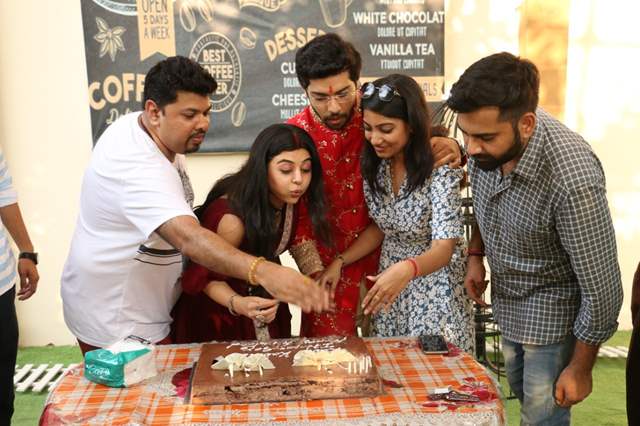 The show ‘Kabhi Kabhie Ittefaq Sey’ is celebrating its 100th episode milestone on 28th April, 2022. The Star Plus show ‘Kabhi Kabhie Ittefaq Sey’, created by Leena Gangopadhyay, and revolves around the chaotic lives of ‘Anubhav’ and ‘Gungun’, who have no clue about their feelings for each other. The show has been on the rise since its release and it’s all thanks to the creators, actors and the crew.

With its release on 3rd January 2022, the show has kept us on our toes with its intriguing storylines and continues to do so. Now, the show ‘Kabhi Kabhie Ittefaq Sey’ has reached its 100th episode milestone and we are excited to celebrate this success along with the cast and crew!

Manan Joshi, who plays the role of ‘Anubhav’, on ‘Kabhi Kabhie Ittefaq Sey’ reaching its 100th episode, *“It feels really great! This journey felt like it has been on light speed. Feels like just a couple of weeks back we were shooting the first episode. It feels really humbling and the bond with everyone is so strong and we just keep becoming stronger and stronger and more like a family on set. It’s a lot of fun to come on set now.”*

Talking about his character, Manan Joshi says, *“I’m always excited to play my character and ‘Anubhav’ especially is keeping me on my toes because there’s always something new that he has to offer. The writers always keep giving me more to play, more to explore, in ‘Anubhav’. Now he’s sort of trying to save ‘Gungun’ and he’s becoming really protective about her and yet does not know about it. So, there are lots of things that he’s confused within and is not aware of that he’s experiencing. This is something that is exciting about my character right now!”*

Manan Joshi on the show is going through its biggest high-point and his experience, *“I, honestly, am very excited always, in general. Like, I’m jumping around! I love the way the story is shaping up and there is so much of twists and turns and there’s so much of surprises for the audience and even we as characters sometimes get surprised when we read the script and when we read the screenplay. So, all-in-all the experience is exciting.”*

Respect to all the cast and crew members of ‘Kabhi Kabhie Ittefaq Sey’ for their devotion to the show even in these times, and heartfelt congratulations on their successful 100 episodes!

*Tune in to watch ‘Kabhi Kabhie Ittefaq Sey’ every Monday to Saturday at 7 PM only on Star Plus!*