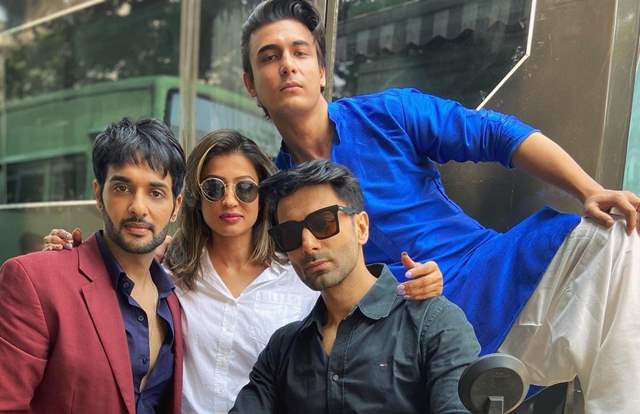 Sony TV’s recently launched show ‘Bade Achhe Lagte Hai 2’ had a grand wedding affair and Ram and Priya finally tied the knot. The show is produced by Balaji Telefilms and has a stellar star cast including actors like Disha Parmar, Nakuul Mehta, Pranav Missra, Sneha Namanandi, Ajay Nagrath, Alefia Kapadia, Abhinav Kapoor, Aanchal Khurana among others. The show has a young group of actors who often indulge in fun and pranks during the shoot.

India Forums got in touch with Abhinav Kapoor who plays the character of Vikrant in the show. We asked the actor about the fun that they have on the sets. He said, “I think all of us are a bunch of very naughty people. However, I feel that Ajay & Utkarsh are the funniest and naughtiest on sets of BALH 2. This duo plays the majority of pranks”.

Talking more about pranks, he added, “We don’t spare anyone other than the senior members of the cast so for us all are bakras … Though we recently discovered that even the senior members in the crew are equally notorious and fun. All of us share a great rapport with each other”.

Featured Video
We asked the handsome lad to tell us about a recent prank that they pulled, he said, “The other day Utkarsh had an argument with someone and he told us about it. After a while we caught two cops who had come to shoot for some sequence and we took them to him pretending that they’re real cops had come over to discuss that case with him. It would have been crazy fun to keep the prank going for few more minutes but then we couldn’t control and bust out laughing. He then found out that it was a prank pulled on him”.

Aren’t they super naughty and fun? Show some love for the cast of ‘Bade Achhe Lagte Hai 2’ in the comment section below.