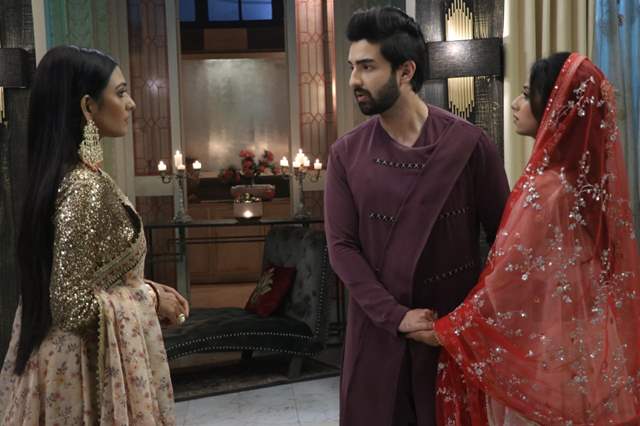 Zee TV’s Bhagya Lakshmi has kept its audience entertained through its interesting storyline revolving around life, love, karma, and destiny. Set against the backdrop of Mumbai, ‘Bhagya Lakshmi’ follows the journey of Lakshmi, a selfless girl of limited means, who despite her humble background and the curveballs life has thrown at her, always puts others’ needs before hers. The show has already impressed the audience courtesy of its intriguing storyline and relatable characters. Recently, we saw some sparks fly between Rishi (Rohit Suchanti) and Lakshmi (Aishwarya Khare). However, Rishi is still in a dilemma and cannot choose between his wife – Lakshmi, and the love of his life – Mallishka (Maera Misshra). In fact, Mallishka even asked Rishi to secretly marry her, and viewers are soon to find out if Rishi will choose Lakshmi over Mallikshka or not?

In fact, in the upcoming episodes, Lakshmi will be seen taking Viraj and Mallishka to a temple, and as soon as aarti gets over Rishi and Mallishka try to tell Lakshmi the truth. But destiny has other things in mind and viewers will see how Rishi will leave Mallishka’s hand to save Lakshmi who was about to get hurt while saving a beggar. This will entice Mallishka furious to marry Viraj just to get back at Rishi. However, during the Roka ceremony, Rishi will be seen telling Mallishka to marry Viraj in anger but to remember that no one will love her as much he does. Mallishka in turn will ask Rishi to do a Gandharva vivah with her.

Stuck in a dilemma, Rishi will get flashbacks of all the times they tried getting married and how it put his life at risk. He even remembered the promise he made to his mother and will be seen telling Mallishka how he can’t break her trust. But as soon as he sees the Roka ceremony happening, he decides to write a letter to Mallishka telling her how he is ready to secretly marry her. But instead of reaching her, the letter will reach Lakshmi.

While the show continues to intrigue audiences across the country, it will be quite interesting to see what will happen when Lakshmi reads that letter. Will Rishi really end up getting married to Mallishka in secrecy?