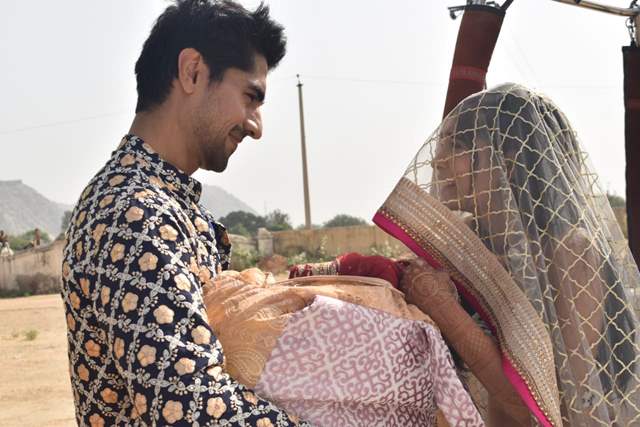 The Wednesday episode of Rajan Shahi’s “Yeh Rishta Kya Kehlata Hai” started with Abhimanyu telling Akshara that Aarohi has followed him to the temple. Akshara gets worried as she feels that they will end up fighting. Aarohi tells him that she is there only for Akshara and asks him how he will bring the lehenga back when he doesn’t know which one it is. Akshara tells Kairav that Aarohi is with Abhimanyu and she is worried what might happen there but Kairav asks her to look at the brighter side and tells her that they might end up becoming friends. Just then Reem informs them that the flower vendor has not arrived because of some traffic jam. Akshara and Kairav realize that Abhimanyu and Aarohi are also on the same road.

Meanwhile, Harshvardhan is fuming as he got to know that Abhimanyu is the one who went to get Akshara’s lehenga. He tells the Birlas that his son is already in control of his would-be wife. Manjari asks him to calm down and tells him that Abhimanyu will soon return.

Abhimanyu and Aarohi were still looking for the lehenga when Aarohi hurt her foot, but they managed to find the lehenga. Then while leaving Aarohi twisted her ankle and Abhimanyu starts looking at her with doubt. He tells her that he has very little time left and he needs to reach on time for the wedding. Aarohi asks him to leave her and go. But Abhimanyu knows that Akshara will get upset because of this and takes her along. They leave, but because of Aarohi Abhimanyu’s phone falls down and the screen cracks. Later he finds a punctured tyre and asks Aarohi if she did all this on purpose to stop the wedding.

At the same time, Manjari tries to console Akshara and tells her that between all these challenges that they are facing they should actually look at the brighter side as she and Abhimanyu will become one forever. Manish also learns that Aarohi has gone to get the lehenga and scold the kids. Later, he tells everyone to get ready so that they can start with the wedding rituals as soon as Abhimanyu comes. Akshara is in tears and wonders if Abhimanyu will be back on time. Just then she notices a hot air balloon.

In the upcoming episode, we will see that Akshara goes in a hot air balloon to rescue Abhimanyu but while going to the wedding venue strong wind pushes them in the opposite direction. Akshara wonders if they will face some more difficulties on the way. Meanwhile, Mahima tells the families that she doesn’t see the wedding happening. To know what happens next, keep watching “Yeh Rishta Kya Kehlata Hai”.