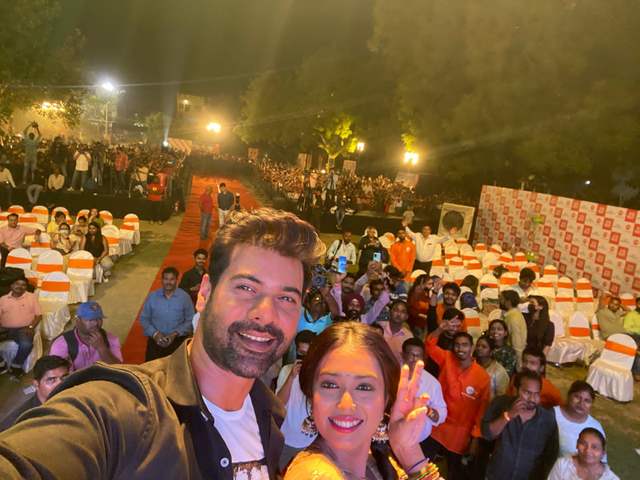 Zee TV, over the last 3 decades, has emerged as a broadcaster that brings its viewers stories that mirror their world, touch upon subjects close to their hearts and introduce them to characters that they fall in love with. After introducing audiences to the heart-warming story of Mithai earlier this year, the channel is once again set to present a fresh narrative – Pyaar Ka Pehla Naam Radha Mohan. A mature romance based in modern-day Vrindavan, the show will introduce viewers to Mohan (played by popular TV star Shabir Ahluwalia) who was once an effortless and easygoing charmer with the whole world wrapped around his little finger. While the men would idolize him, women would swoon around this hero. However, he has somehow lost that smile along the way and is, today, an intense, brooding man with an invisible wall built around him that keeps everyone out with the exception of his mother who means the world to him. A man whose mere presence would light up the room and lift spirits now seems to be weighed down by a burden of pain and regrets. In deep-seated awe of Mohan from her adolescent years, Radha, on the other hand, is a spiritual and optimistic girl, full of love and warmth and is crestfallen to see her Mohan, having lost that spark of positivity he had himself infused in her. With several intriguing layers and dimensions to its plot, Pyaar Ka Pehla Naam Radha Mohan will follow Radha’s journey of rekindling the lost spark in Mohan’s eyes and bringing back his smile. The show premieres on 2nd May and airs every Monday to Saturday at 8 pm, only on Zee TV!

Produced by Studio LSD Productions, Pyaar Ka Pehla Naam Radha Mohan sees popular TV superstar Shabir Ahluwalia essaying the role of Mohan after ruling hearts for 7 years as Abhi in Kumkum Bhagya. The role of Radha is played by the talented actress Neeharika Roy. While the show has managed to generate a lot of intrigues ever since its first promo went on air, Pyaar Ka Pehla Naam Radha Mohan was unveiled in front of the media and the channel’s loyalists at a mega launch event in Lucknow where the leading lady Radha and thousands of people tried their best to make Mohan smile once again. While she stunned the audience with a enchanting dance performance, thousands of people of Lucknow showcased their solidarity in her endeavor and after a few mesmerizing acts, it was our Radha’s epic finale act that finally made Mohan cheer up and dance along with her!

Zee TV Business Head Aparna Bhosle said, “The idea behind this launch is to strengthen our core primetime with a fresh story at 8 PM while taking Kashibai Bajirao Ballal to 10 PM with the show entering a completely new phase of its narrative following the recent leap. Pyaar Ka Pehla Naam Radha Mohan is a mature romance centred around a complete charmer whose mere presence could uplift the spirits of everyone around but has now forgotten to smile. The show explores the journey of reviving his lost spark. We are happy to partner with LSD Films in bringing this show to our viewers who’ll be thrilled to see their favorite actor Shabir Ahluwalia in this new avatar after winning their hearts as Abhi for over 7 years. With exciting high points planned across all our key fiction shows and DID L’il Masters opening up to a warm welcome, audiences have a lot to look forward to on Zee TV all through the week.”

Shabir Ahluwalia said, “I have never shied away from taking on a different character. In fact, I am always excited and enthusiastic about such a role. My new show, Pyaar Ka Pehla Naam Radha Mohan, is a fascinating story, very unique and full of twists and turns. I personally love the way Mohan’s character has been written. Mohan is a strong, well-defined yet challenging character with several different shades. He is quite different from what I have played on-screen before, so I am excited to see how the viewers respond to my new avatar. I am happy that we were able to give a small glimpse of our show to our media friends and the lovely people of Lucknow and their response was truly overwhelming.”

Neeharika Roy also added “I am thankful to Zee TV for giving me this mega opportunity. I will do my best to do justice to Radha’s character and I am really very excited to play this character. In fact, I relate to my character of Radha, who is a very religious girl, just like me. It has been lovely working with Shabir Sir and the whole cast and crew. However, seeing the audience’s reaction in Lucknow has been the best experience of our journey till now.”

Producer Prateek Sharma of Studio LSD Productions said, “After presenting audiences with a heart-warming narrative like Teri Meri Ikk Jindri, our next show with Zee TV revolves around Radha and Mohan’s layered and intriguing love story based in modern-day Vrindavan. The show has a lot of dimensions ranging from a unique mother-son bond, an estranged father-daughter relationship, alliances forged with vested interests, one-sided love that borders on devotion and more importantly, the story of a man who has forgotten to smile and the journey of reviving his lost spark. We are hopeful that with all the surprises in store for the audience as the story progresses, the viewers will connect with Radha and Mohan’s journey and shower them with a lot of love.”

In the meantime, to find out what turned an effervescent Mohan into a cold soul bereft of any joy, tune in to Pyaar Ka Pehla Naam Radha Mohan every Monday to Saturday at 8 pm from 2nd May, only on Zee TV