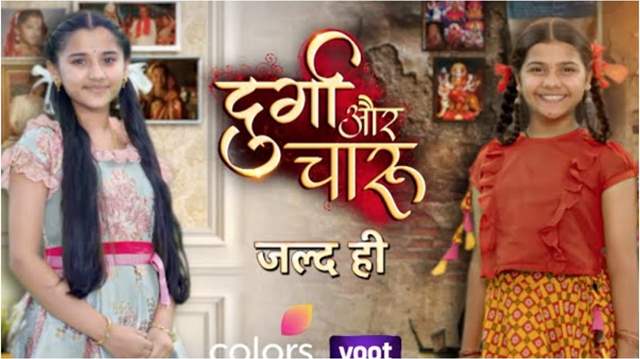 The legacy of the late Bondita and Anirudh Roy Chowdhary from one of the most loved television shows ‘Barrister Babu’ lives on through their daughters in COLORS’ ‘Durga Aur Charu’. While Charu is her mother’s soul, Durga is her shadow. The show outlines the journey of the two sisters, who are bound by blood but are starkly different owing to their diametrically opposite upbringing after being separated as children. Produced by Shashi Sumeet Productions, the show will premiere on 12th December and air Monday to Friday at 8:30pm. The channel has roped in popular actors Aurra Bhatnagar and Vaishnavi Prajapati to play the lead roles as two sisters – Durga and Charu, respectively. What does kismet have in store for the daughters of Bondita and Anirudh? Is a union on the cards for them?

Manisha Sharma, Chief Content Officer, Hindi Mass Entertainment, Viacom18, says, “Delivering stories that strike a chord with our viewers has always been our focus at COLORS. Such was the story of Barrister Babu, a show that enjoyed incredible success and love from the audience. Continuing its legacy, our new fiction show Durga Aur Charu traces the heartfelt journey of Bondita and Anirudh’s daughters who are raised in two different environments resulting in having contrasting personalities. As we present a fresh chapter and the continuation of the popular show, we hope to receive the same love and appreciation with Durga and Charu.”

Set in the pre- and post-Independence era, ‘Durga Aur Charu’ chronicles the story of Durga (Aurra Bhatnagar), a meek and pessimistic girl and her street-smart elder sister Charu (Vaishnavi Prajapati). The two sisters are living apart oblivious to each other’s existence. They are different as chalk and cheese owing to their distinct upbringing. While Durga is reticent, suppressed, and great at academics, her sister Charu is fierce, outspoken and earning her livelihood by performing acrobatics. The former is adopted by wealthy parents and the latter is brought up by the con artists. How long will the two remain unaware of each other?

Producer Shashi Mittal says, “Durga aur Charu is a period drama set during the British colonial era which traces the journey of two siblings who not only lose their parents but also get separated at a young age. But eventually destiny brings them together and their relationship is tested through several emotional adversaries. With our shows, we always aim to deal with various themes which impact our societal thinking in some way or the other. Our association with COLORS has been a fruitful one, we have had the opportunity to work with the best team with creative freedom, and we hope that with ‘Durga Aur Charu’, we deliver yet another compelling story to the viewers.”

Excited to be essaying the role of Durga, Aurra Bhatnagar says, “As young Bondita, I have received immense love and support from the viewers and now I am super excited to step into the new role of Durga. She is the exact replica of her mother who excels in academics but is socially awkward due to her upbringing. After making my debut with Barrister Babu and COLORS, I’m thrilled to be associated with the channel again to start a new chapter.”

Set to be seen in the role of Charu, Vaishnavi Prajapati says, “Essaying the titular role of Charu is a big opportunity for me, and I am thankful to the entire Durga and Charu team and COLORS for giving me this chance. What I love about Charu is that she is feisty and fearless like her mother Bondita. I’m positive that Charu will win the hearts of the viewers as a confident girl, who knows how to take control of her life.”