I will shoot myself before I compare myself to Salman Khan: Ram Kapoor 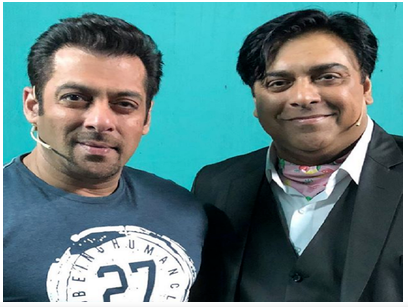 Actor Ram Kapoor is going to make a comeback on the small screen after a long gap. The actor, who has given hit shows like Kasamh Se and Bade Achche Lagte Hai, will turn host for an upcoming reality show Zindagi Ke Crossroads.
Owing to the fact that superstar Salman Khan’s reality quiz show Dus Ka Dum will also go on air on the same channel, Ram was asked about comparisons drawn with Salman on the anchoring front. To this, Ram, at his wittiest best replied, that he doesn’t even want to think of any comparisons being drawn.
“I think I will shoot myself before comparing myself to Salman Khan. I haven’t even thought of it. He is THE Salman Khan.” Ram further said, “This show is bigger than anyone of us. While I would refrain from giving opinions, I will do get the people to share their views openly ”
The actor also spoke about hosting the hit show Bigg Boss if offered. “I do not think they will want to come down to a lesser brand when they have a brand like Salman. In front of Salman Khan, I am a lesser brand. Though I would have liked to host the show but don’t think it would be possible.”
Talking about participating in Bigg Boss, Ram said, “I will never participate in Bigg Boss as a contestant. I am a very private person. To be out there showcasing your personal space is what I am not comfortable in doing. Also, I cannot stay away from my family and children for three-four months. It’s just not happening.” Reality show Zindagi Ke Crossroads will hit small screens from June 6.