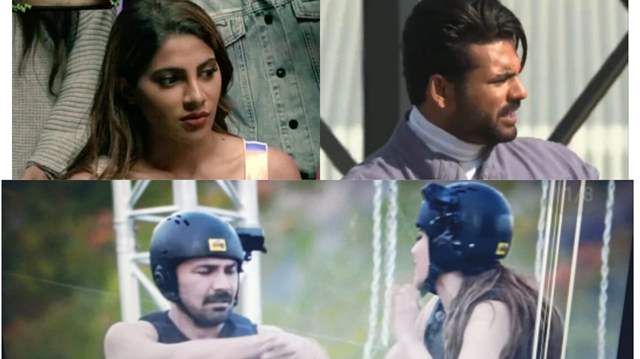 Colors TV show ‘Khatron Ke Khiladi 11’ is getting quite interesting with each passing episode. Bigg Boss 14 fame Nikki Tamboli was evicted in the first week. However, she was brought back in the show. While she performed one stunt well, she started to abort others stunts.

In the previous episode, Nikki aborted yet another partner stunt. Nikki and Abhinav were paired together for a partner stunt but Nikki aborted the stunt without even trying, which resulted in Abhinav also facing the consequences and landing himself in performing more difficult stunt.

Nikki did perform another water stunt brilliantly. However, she will be seen aborting another partner stunt putting Vishal Aaditya Singh in trouble. While fans were upset with Nikki’s behavior towards the show from the beginning, they’re really furious as now Nikki’s disappointing performance is letting other strong contestants in trouble.

Featured Video
Post yesterday’s telecast, the fans of the show who love celebrity contestants performing daredevil stunts are left furious as now the contestants who have been paired opposite Nikki in partner stunts are facing the brunt of her inhibitions. Have a look at what fans have to say about Nikki Tamboli’s stint in Khatron Ke Khiladi 11: .

What are your views on Nikki’s stint in the show? Post your thoughts in the comment section below.

Until now, contestants like Saurabh Raaj Jain, Aastha Gill and Mehak Chahal have been eliminated from the show.