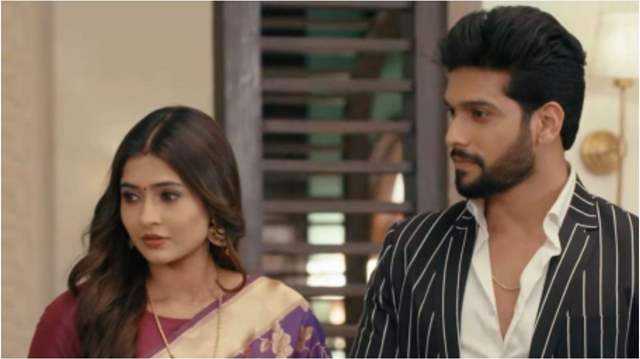 Star Plus show ‘Mehndi Hai Rachne Waali’ is getting quite interesting with each passing episode. The current track of the show revolves around Pallavi separating with Raghav and staying at Deshmukh house for breaking her trust. Raghav has been trying to convince Pallavi but in vain.

In the upcoming episode, Jaya tells Pallavi that she should stay at Rao mansion. She states that she is ashamed of calling Raghav his son. Pallavi tells her that she can’t stay back at the house and that she and Keerti will always remain her family but she can’t continue to be at Rao mansion.

Raghav breaks down and drinks alcohol. He gets heavily drunk and tries to punish himself by cutting his veins. Jaya arrives at the right time and slaps him and asks him to not continue doing wrong things. He asks Jaya to make things like before and tells her that he is repenting his mistake. Jaya gets emotional seeing Raghav’s state.

Pallavi thinks about Raghav. Vijay talks to her and asks her to have food. Sharda comes and hugs Pallavi. Pallavi decides to do business and achieve success.

Featured Video
Sunny and Esha are happy that Pallavi left the house. Esha tells Sunny that the family hates her and she can’t think to fitting into the family. Sunny tells her that she needs to wait until Raghav and Pallavi are separated permanently. He says that he has a plan to ensure the same.

Pallavi reaches at the shop before time. A goon eve teases her. She tries to hit him but he forces himself on Pallavi.

Furthermore, Raghav gets ready to walk on burning coal to give agni pareeksha to Pallavi. Amruta informs Pallavi about the same.