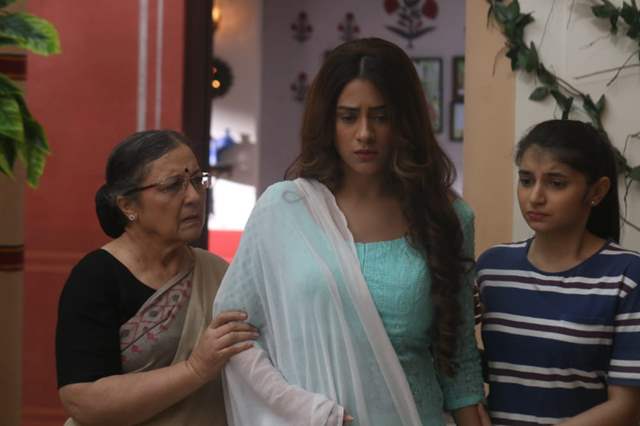 ‘Woh Toh Hai Albelaa’: Sayuri and Kanha hint at a big storm The Friday episode of Rajan Shahi’s “Woh Toh Hai Albelaa” started with Kanha bringing Sayuri back home. The family is happy to see her back and ask her if she was trying to kill herself, and she should have taken them along. Priya gives her some water when she asks Indrani to make something for her. Bhanumati takes her inside. Tej and Dhanraj tell Kanha that Sayuri is with her family now and they should also go back home. While going Tej stops at the temple wondering about Cheeru did before he took his last breath. When Dhanraj comes to him, he tells him that when Cheeru made Kanha wear his pagri he did not mean that they should end their enmity but he wanted them to get married.

Meanwhile, Indrani makes jalebi for Sayuri and she tells Bhanumati that they should go to another city. She tells her that they have become a burden for Kanha too and it will be for the best if they leave. Bhanumati, however, tells her that Cheeru has shown a way to Sayuri and he wanted her to get married to Kanha. Sayuri hears this and is in shock.

At the same time, Kanha tries to convince Tej and Dhanraj that he can’t marry Sayuri as she loves Cheeru. He also tries to take Anjali’s name but Dhanraj tells her that he knows that he only likes her and doesn’t want to get married to her. Dhanraj requests Kanha to agree to it and even tells him that in the coming days life is going to be tough for Sayuri but with him by his side she will at least be able to overcome it.

In the upcoming episode, we will see that the Sharma family has packed their bags to leave the city. Tej and Dhanraj stop them and tell them that they still have an option left which is to get Kanha and Sayuri married. Meanwhile, both Kanha and Sayuri are in their respective houses, sitting with a photo of Cheeru, and are heard saying they will soon have to face a big storm. To know what happens next, keep watching the show.