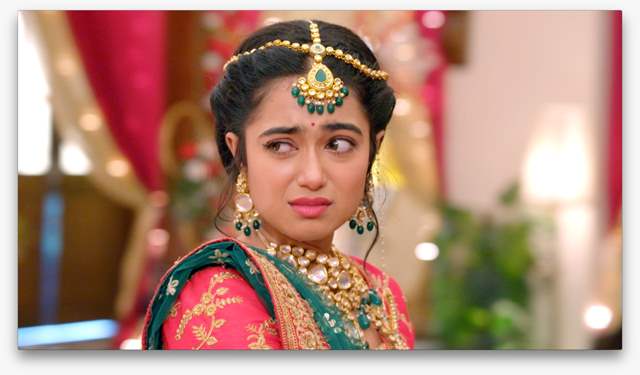 The wedding drama in Prateek Sharma’s “Pyaar Ka Pehla Naam: Radha Mohan” continues as Damini seems to be successful in her plans.

In the Monday episode, the audience will see that Radha hits the police officers and a lady constable was about to attack her but Mohan comes in between. The police officer tells the constable to arrest Ketki but Damini stops them saying she is her sister-in-law. She tells them that she asked them to come as she got a call from Hriday’s wife that’s why she called them, as she realised that they will be able to find Hriday. Radha asks Damini to stop the act. She tells Mohan that Damini knew about the plan so Kaveri and Damini got fake police here. Ketki sides with Radha.

The police officers however show their id cards and Radha and Ketki are shocked to see this. The police tell the constable to arrest Ketki for blackmailing and Radha for attacking an on-duty police officer. Damini acts confused and asks Mohan what’s going on, Radha asks her to stop the drama. The police officer is adamant about arresting them but Damini takes her complaint back.

Police leave but Radha is sure that Damini is behind everything. A furious Damini asks Radha to keep quiet. She tells Mohan how he can think this way about her, and how he can doubt her. Radha asks her to drop the act and Ketki too sides with her. Mohan asks them to stop. He holds Damini’s hand and asks her to go home. She leaves his hand, says it’s over, and leaves from there. Mohan feels bad, and Radha is trying to make him understand, but he stops her.

Meanwhile, Damini sees everything from the rearview mirror and is happy that her plan is working. She calls Kaveri, and tells her that they have successfully executed the first step and she had already planned further. She tells her now everything is in her hand and there is no room for mistakes.

At the same time, the doorbell at their house rings, and Kadambari opens it. She gets a paper which is a court hearing for Gungun’s hearing in three days. Tulsi’s mother Narmada comes there and insults Kadambari. She curses Mohan and tells her that he will not get married easily. An upset Kadambari tells her that it’s not good for Gungun to get involved in legal matters, but Narmada tells her that she wants her granddaughter out of this place. Tulsi is shocked to see this and is very sad. Narmada leaves with her son, who texts Damini that his job is done.

After they leave, Kadambari looks for Mohan but he’s nowhere to be found, Ajeet tells her that Ketki is also missing. Just then Damini enters and is furious and Radha, Mohan and Ketki follow. Kadambari is confused and asks her what is happening and why Ketki is dressed like this. She even scolds Damini that she is the bride and she shouldn’t leave the house. But Damini tells her that she doesn’t want to get married anymore. Keep watching “Pyar Ka Pehla Naam: Radha Mohan” to know what happens next.