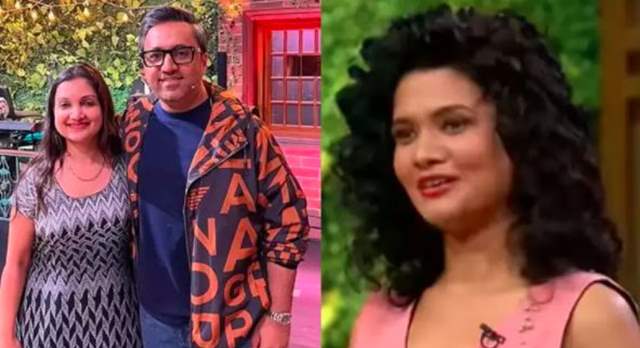 It is no secret anymore how Shark Tank India went on to become a mammoth success where the show that just wrapped its first season became one of the most buzzing and popular shows on social media. From memes to genuinely good pitches and a learning lesson for so many out there, the viewers already cannot wait for season 2.

And just like everyone, a few members of the panel went to become fodder for meme fest and one of them was Ashneer Grover. The man was constantly marked upon for his blunt remarks and even being rude to many. One of this lines ‘yeh sab doglapan hai’ became extremely popular and went on to invite an array of memes. A recent glimpse of the show showed how Grover had demeaned a brand but his wife was wearing clothes from the same designer.

Fashion designer Niti Singhal was among the 198 pitchers, who wanted funds for her company. The designer’s brand sells reversible and convertible clothing. In one of the promos, that was previously shared, shark Ashneer Grover can be seen telling the designer, “Bahut hi ganda fashion hai ye. Nobody will wear this in my house. Aap ye band kar do. Why are you wasting your time?”

However, Ghazal Alagh was appreciative of her brand and said that it has a lot of potential. While pitcher Niti didn’t crack any deal with the sharks, recently, she posted a video where Ashneer’s wife Madhuri Jain Grover wearing a dress from the designer.

Madhuri had worn the dress to The Kapil Sharma Show. Ashneer also posted a pic from the show. The video shared by Niti shows Ashneer lashing out at her brand and then his wife wearing the brand’s dress and it ends with Ashneer’s famous one-liner from the show, ‘Yeh sab doglapan hai’. Niti’s brand wrote, “We love how @madsj30 look beautiful in our Twee dress at @tksshowofficial ! Thank you Madhuri, for believing in our work…”

Reportedly, Niti had gifted that dress to Madhuri, when they came to pitch their brand in the show.