Woh Toh Hai Albelaa’: Is Balwant hinting at something unforeseen? 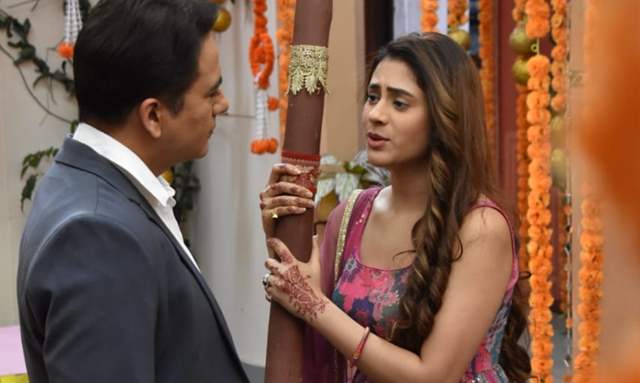 The Monday episode of Rajan Shahi’s “Woh Toh Hai Albelaa” started with Kanha going to the temple and praying that nothing bad happens during the wedding because that will break Cheeru’s heart. The next day, Sayuri is dancing to “Aaj main upar aasman niche” in her dream when her family wakes her up. She is very excited that she is getting married and asks her sisters to join in. Sayuris is then wondering if the Chaudharys are also excited the way she is.

Meanwhile, at the Chaudhary haveli Kanha gets everyone in the celebratory mood and the brothers dance on “Naacho naacho”. Dev notices Saroj looking at them from a distance and asks her to join them. She hugs Cheeru and then with tears in her eyes joins her sons. Saroj then excuses herself saying she has to prepare haldi for Cheeru. Dhanraj goes to help her and tells her that she should not let her hatred affect the mood everyone is in. He tells her that once Sayuri comes she will win everyone’s heart. Saroj leaves from there. A little later, Cheeru tells Kanha that he wants to meet Sayuri, but because of some pain in his back, Kanha carries him and they go to meet Sayuri.

At the same time, Sayuri is preparing her haldi and Balwant pays her a visit. He tells her that today whatever happens will happen for the good. She then hears Kanha outside her house, and Balwant tells her that her hero has come. Sayuri tells him it’s just Kanha but then she looks outside and finds Cheeru too there. She goes outside to meet him.

In the upcoming episode, we will see that Cheeru tells Sayuri that all his relationships are hers now and she has to take care of all of them. They bid adieu to each other. Once she reaches home Balwant asks her if she is happy meeting Cheeru for the last time. Sayuri tells him it will be a memorable day today, to which he tells her it will be unforgettable. Meanwhile, Cheeru also tells Kanha that sometimes in life one needs to do things that are good for others. To know what happens next, keep watching the show.