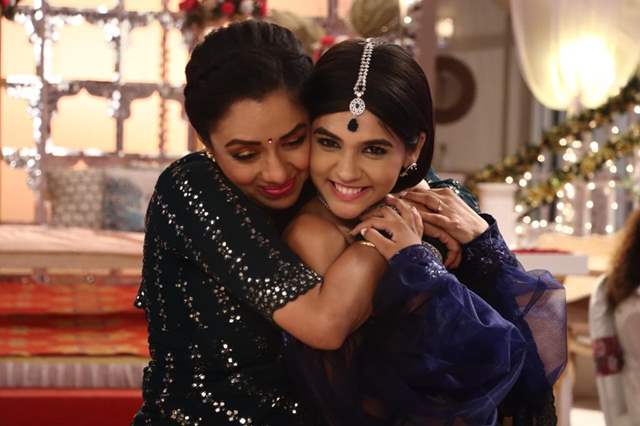 It was a mahasangam episode of “Yeh Rishta Kya Kehlata Hai” and “Anupamaa” on Saturday. The episode began with Abhimanyu consoling Akshara that it was not her fault that she didn’t know about his allergy. He tells her that they are still learning new things about each other and have their whole lives to discover more. Just then Kairav comes there with the ring samples and asks Abhimanyu and Akshara to pick their favorite. Both decide on the same rings and Abhimanyu tells Kairav to keep them safe because it’s his mother and Akshara’s choice.

Next we see the Goenkas appreciating Reem’s efforts in putting up such nice decor for the engagement. Suhasini asks Kairav about the rings and he tells her that Vansh is getting them. Vansh informs Kairav that his car broke down and he had to take a cab. Kairav asks him to come home before the Birlas reach. While he was talking over the phone, the rings fell off his bag.

The Goenkas later welcome the Birlas. Mahima says she is not happy that they are doing the engagement without Manjari. Suhasini tells them that even they are not very pleased with the decision but it was Manjari who wanted this to happen. Kairav then requests both the families to keep their issues aside for Akshara and Abhimanyu and enjoy the day. Harshvardhan asks them about Abhimanyu and Akshara and Kairav tells them that they will come together. He informs them that Akshara wanted to get Manjari’s blessing before the engagement and has gone to the hospital.

At the hospital, Akshara sees Abhimanyu and tells him that her fiance is looking very hot. They then go to meet Manjari who tells them that she wants them to enjoy the day and not worry about anything. She tells them that her blessings are always with her AbhiRa. Akshara and Abhimanyu then realise that she has given a name to their relationship.

Meanwhile, Anupamaa too reaches Udaipur with Anuj. She remembers telling Bapuji about Anuj’s meeting and how he asked her to accompany him and not worry about anything else. Bapuji tells her that if she comes back the whole family will gather around her and ask her questions so she is better off to Udaipur with Anuj and promises her that he will take care of Kinjal. Anupamaa then asks Anuj to focus on his meeting and tells him that she will visit all the tourist spots in Udaipur on her own. Later, she drops Anuj but had to stop after her cab broke down. She is standing next to a house which is fully decorated and realises there must be some ceremony going on. She then sees Akshara coming there with Abhimanyu. She recognises her and Akshara too remembers who she is. They hug each other and tell Abhimanyu about their first meeting. Akshara and Abhimanyu realise that since Manjari couldn’t be there, God has sent Anupamaa in her place and asks her to join their engagement ceremony. Anupamaa agrees and they enter the house dancing. Abhimanyu and Akshara introduce Anupamaa to their families and they give her a warm welcome.

A little later, Kairav asks Vansh for the rings and is surprised to know that he has misplaced it. Vansh feels that he must have dropped it in the cab. Kairav tells him that he will talk to the factory and see if it can be made again. He tells him that it will take six hours for them to get the new ones and tells Vansh that no one should know about it. Reem overhears their conversation and tells them that they will find it together. Just then Akshara goes to check her phone and finds a small pouch in her bag. It’s the same pouch that has Akshara and Abhimanyu’s rings. The families then talk to Manjari and she thanks Anupamaa for joining the celebration.

At the Shah abode, Rakhi comes there and tells them that she will be staying with them till the time Anupamaa doesn’t return. She tells Baa that her ex-daughter-in-law is on her honeymoon with her boyfriend and must be having a blast. Baa gets upset hearing this. She goes outside and starts crying. Vanraj consoles her but she tells him that Anupamaa has taken advantage of their love. Vanraj then sees Rakhi there and asks her to join hands with him in breaking Anuj and Anupamaa’s relationship.

In the upcoming episode, we will see that while Anupamaa joins Akshara and Abhimanyu for a dance, Vanraj tells Rakhi that he will create a big scene once Anuj and Anupamaa return. Baa also tells Bapuji that Anupamaa has stooped so low with her decision of marrying Anuj and now even she will not think twice before saying anything. To know what happens next, keep watching “Yeh Rishta Kya Kehlata Hai”.